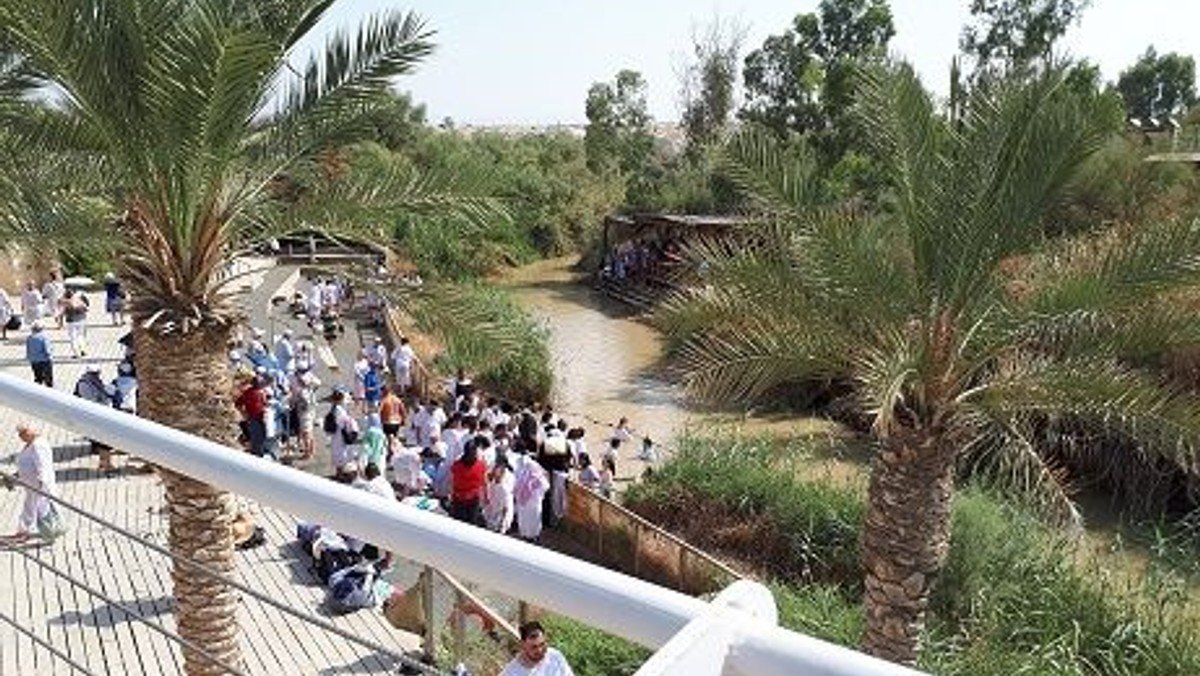 We had a 2-½ hours bus ride from Tiberias on the Sea of Galillee down the valley of the River Jordan. To the east of the river was the border between Israel and Jordan tensely crossed only at a few heavily guarded frontier posts. We passed the Allenby Bridge border post and the bus turned off the main highway and swung down to the river. We entered a large bus park and visitor centre which were crowded with vehicles and dusty, hot and excited pilgrims.  This was the place where John the Baptist had called crowds to repent and be baptised. On the Israeli river bank was a viewing stand, roofed over to provide shade and with concrete steps and ramps leading down to the river itself.

Groups of every brand of Christianity jostled patiently to reach a prime place by the river itself. Many had changed into full-length white gowns and, singing songs of praise and prayers of thankfulness, they immersed themselves in the green water before  surfacing gasping and spluttering.  Those belonging to the more restrained Anglican tradition tentatively dipped our fingers in the river and touched our lips or foreheads or, more adventurously, filled  a small screw top bottle with Jordan water.

The river was narrower than we expected, its banks enclosed by a fringe of palm trees and vegetation.  A stern notice banned us from crossing the border to the other bank. Lifesaver rings were ironically and strategically placed   to save the lives of pilgrims carried away by the current.  Two armed Israeli soldiers kept a listless eye on the proceedings.

Despite all that there was a palpable sense of reverence about the place . We were present in a Holy Place; just as had been John the Baptist, the crowds of First Century Jews, countless streams of pilgrims over the centuries,  stood at the place where Christ was baptised.

It would have taken Jesus five or 6 days to walk here from Nazareth. He joined the crowds of people who had been turning up for John the Baptist’s repentance campaign. John had possibly not seen Jesus for years and years and yet he instantly recognised Him. With no hesitation or doubt in his mind, he let everyone know that this hot and dusty traveller is the Lamb of God, a description which would have resonated with every Jew; it was the story of the Passover – lamb’s blood on the door posts and the escape from Egypt.

John knew that his role, (of calling people to repent with a baptism of water), had been superseded by the appearance of Jesus. Jesus had come to baptise with the Holy Spirit.  If John had been into tweeting or running a Whats Ap Group surely the Social Media would have been buzzing before breakfast was served that morning.

If I had been in that crowd 2000 years ago, would I have fully understood what had just occurred; all that Lamb of God and redemption stuff?  But what I do hope is, that if had I been there the following day and seen John the Baptist point out “This Lamb of God” to his disciples, that my interest would have been kindled. It certainly fired two of John’s disciples, Andrew and his friend.

It is annoying that John the Evangelist couldn’t remember the other fellow’s name so I’ll try to imagine for a minute that I’m the anonymous one. I’ve just had the Lamb of God pointed out to me.   “Wow Andrew. Let’s follow him and see what he is up to. We might be able to ask him some questions and he might teach us a few lessons? And there’s maybe a chance for a selfie – I’ve got my camera with me”.

We are a bit diffident in following him but then Jesus turns and, very friendly, asks us  ”Hi. What are you guys looking for?” That rather floored us and we could only come up with a rather tame “where are you staying?”  We might as well have said “We like the colour of your robe; did you get it from Primark?” But once the ice was broken, he proved a very approachable guy and invites us to come and see.

Andrew and his anonymous friend made the most of it staying with the Rabbi as they called him for most of the day. Whatever religious instruction they got from Jesus they clearly got their money’s worth. For the very next day Andrew went looking for brother Simon Peter and told him he’d hit the jackpot - “We have found the Messiah”.

If you have followed me so far on this journey, we’ve now passed two milestones; (a) Recognition that Jesus is the Lamb of God and (b) Conviction that he is the Messiah.

Now comes the third, which is implicit in Jesus’ question “What do you want?” That must mean more than the load of presents some of us got for Christmas. It must mean, “I want to serve you.” “In humility”

To serve him- means what?

At the extreme, we all know where that got Simon Peter– a new name (Cephas)- a different career from that of Galilean fisherman – a leading place in Jesus apostleship team- leader of the church after Jesus crucifixion -leading to a martyr’s death.  But as rather more imperfect human beings, we can still aspire to be as Christlike as we can. In the reading from Isaiah this morning, the second of Isaiah’s Servant Songs, the Servant was given a name whilst still in the womb, and, before birth, was already genetically imbued with potential to be developed and with embryonic skills to be practised in later life.

This week’s Servant Song is Number 2 of the four servant prophecies written by Isaiah. Barry avoided preaching last week on Song No1 by asking us to read them ourselves in order to take the exam he’d be setting us in the near future.

Now we might like to do this and think what they might be saying to us personally; how can we be a Light to the Nations? What can we do to bring justice to the world? And how can we point others towards our glorious God?

Even if we don’t think we can shine like a searchlight, we can still be a flickering candle;

and if we don’t think we can cleanse the world of hatred we can show friendship to our neighbours;

and if we are not a Bishop Tutu we can at least be known amongst our community as members of an active and professing Christian Church.  Particularly pertinent as this is the Week of Christian Unity.

So in 2020, let’s just think of the answer we might give Jesus to his question “What are you looking for?”

Do we want to strengthen God’s Church? For example, there are some quite serious holes in our organisation holding back our best endeavours for God; just two of which are a new PCC Secretary, and strengthening the Wednesday Coffee club team. Have I the time and have I the skills to do that or something else?

Do we want to help in some way to spread justice in God’s World? Can I find some slack in my finances and consider my giving to the charities we support? Half the price of an M&S Meal for two is like manna from heaven to Foodwise or the pregnant Haitian lady whom Compassion is helping.

Can I pause, like Jesus, to give time to others – to wonder why Bill or Mary have missed church for the last month, or to ask why we haven’t seen the people next door for a while and go and think what the Samaritan might have don?

Like the many flavoured Christians at the River Jordan side by side, soaked, dripping or merely splashed a little, joyfully emerging from the waters in which Christ was baptised we each need to answer with Instant Recognition, Complete conviction and total humility the question Christ posed “what is it you are looking for?”